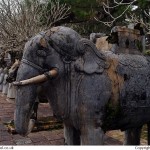 From Hanoi I took a sleeper train down to the ancient town of Hue (pronounced hway), boarding at around 7pm and arriving at 8.30am the following morning. The sleeper train was much the same as the one I took in China, except this time I was sharing with westerners. Overall, though, the feel of the train was much more grimy and less modern. Western toilets, though, so I can’t complain. I ate my instant noodles and we had a few beers in the train bar before they kicked us out at 10pm, and I went to bed. I slept pretty well, the rocking of the train was perfect to put me to sleep, although the mattress was fairly hard so I woke up the following morning feeling quite stiff.

We took a taxi from Hue station to the hotel, checked in and then me and my friend Monique headed out to explore the Imperial Citadel. It was very pretty, the citadel walls and buildings felt far more ancient than anything I have seen so far, and a lot of them are really more ruins than buildings, now. It was nice to see an ancient town that hasn’t been so heavily restored.