I recently had the pleasure of spending just over a week travelling around Belgium. During this time I managed to visit Bruges and Brussels, with a whistle stop trip to Antwerp in between. Belgium is a country of contrasts, of two languages and of strong beer, waffles and chocolate. This is my list of great things to do in Belgium. It’s by no means an exhaustive list, but it ought to keep you going for a little while. 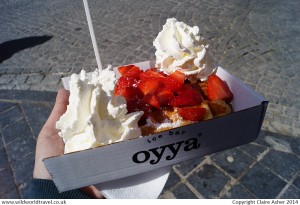 Number one on the classic list of tourist attractions in Belgium – waffles. It is true, the Belgian waffles are the best I have ever tasted, hands down. Whilst in Belgium, I gave myself the challenge to polish off 5 waffles and compare them. Waffles are, however, quite a mammouth task to consume – they are rich and sweet and you really can’t eat two without a healthy gap in between. In the end, I managed 2 of the 5 waffles I’d aimed for (my pitful performance is partially explained by two days spent in bed with a fever in Brussels).

The first I tried was from Oyya in Bruges, and was by far the best of the two. I had their speciality that month, which included strawberries and whipped cream. The hot waffle was crispy on the outside and deliciously gooey and soft in the middle. The whipped cream was a bit much. There’s a reason the locals deplore the ridiculous over-indulgent ‘tourist’ waffles. For my second waffle, I decided to go au naturel and although the waffle itself wasn’t as good as the one from Oyya, it was much more enjoyable in it’s pure, unadulterated form. Some of the best waffles you can buy will come from street vendors, and don’t assume that a long queue equals a great waffle. Above all else, if you’re dithering about which one to order, go for a plainer option – these waffles should really be appreciated alone.

The train ride to Bruges is very scenic, passing through a number of beautiful towns along the way. One of these is Gent (spelled Ghent in English, for some reason). Gent is apparently somewhat of a hidden gem – a vibrant medieval city with relatively few tourists – however for me it remained hidden. All I saw of it was the station, from inside the train, and all I heard was the glowing eavesdropped recommendation of the stranger sat across the carriage from me. Nevertheless, it sounds lovely.

And, at the end of the trip you’ll find yourself in Bruges, possibly the most picturesque town I’ve ever seen. And I’ve actually seen Bruges, so perhaps I have something of value to say about it.

Bruges is a medieval masterpiece, if you can get over the fact that an awful lot of the stunning buildings were actually built (or heavily renovated) in the 1900’s as a ploy to attract tourists. It worked, but pleasingly Bruges manages to not feel too touristy, even if it is.

The many winding cobblestone streets probably helps to create the illusion of a town that is relatively untouched. While you’re in Bruges, be sure to check out the adorable family-run chocolate shop Dumon, the chocolates are absolutely delicious (and reasonably priced) and the building is almost too cute to be true.

Antwerp station is one of the most beautiful stations I have ever visited. It is an ornate architectural masterpiece and a pleasant surprise upon my arrival in Antwerp. A multi-level train station set in a stunning late 19th Century building constructed from stone, iron and glass.

What more could you ask for? Dinosaurs. That’s what. As if the stunning architecture wasn’t enough, Antwerp central station is also home to a number of Dinosaur sculptures.

Why? I do not know. But it was quite a sight after a long train journey from Rotterdam. 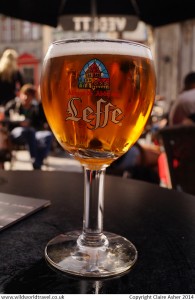 Another thing Belgium is famous for is its beer. The Belgians are renowned for their huge variety of tasty, but very strong, beers. I tried a few of them with interest whilst I was in Belgium, but the strongest conclusion I reached was that Belgian beers must be treated with respect, and caution.

Over 180 Breweries in Belgium produce a variety of beers ranging from a normal, sensible strength (3% – 6%) to absurdly strong beers (12%+) that will mangle your mind. Whether you’re a beer lover or not (I’m not, particularly), you have to try at least a few of the different varieties while you’re there.

Thankfully, the Belgians have the good sense not to serve their stronger beers in large quantities, 330ml and 500ml servings are standard, and you’ll be grateful of that the following morning. Belgian beers are to be appreciated slowly; you definitely don’t want to rush these things.

I met one guy in Bruges who thought he knew better and decided to dry and down a 12% beer in one. He succeeded, but it didn’t stay down for very long. Cautionary tales aside, some of the Belgian beers are very tasty, and sitting out in a small courtyard enjoying an afternoon beer served in a ludicrously complex glass is an excellent way to while away a few hours in Belgium. 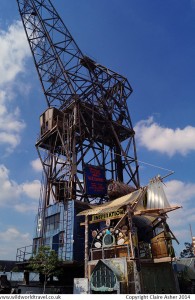 The floating vegetable garden mounted on an abandoned crane project is one of the weirder things I visited in Antwerp, and makes for a rather strange skyline for Antwerps’ Bonapartedok. Sat opposite the famous Museum Aan De Stroom, the organic farm / cafe / art gallery / shop includes recycled art, vegetables, organic beer, and is a pleasant albeit surreal break from the hustle of the city.

Oh… and there’s that fascinating museum with the amazing panoramic view of the city next door, if you get bored. 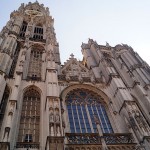