The idea of skydiving wasn’t one that had crossed my mind until a few years ago. Being scared of heights, I suppose it never seemed like the obvious choice for my bucket list. But I started to flirt with the idea a little after my friend told me about his experience skydiving in New Zealand and showed me the video. I liked the fact that, unlike other adrenaline sports such as bungee jumping, you didn’t actually have to jump yourself. Strapped to someone else, they’d do all the scary bit for you, you just had to sit back and try not to have a heart attack! Eventually, after speaking to a few other people about their experiences, I decided that I wanted to do a skydive, specifically in Taupo in New Zealand.

I explored New Zealand on the Stray bus, and planned to hop off the bus in Taupo on my way travelling south from Auckland to Wellington, about 5 days into my month-long trip. As the days running up to my arrival in Taupo ticked by, a nervous excitement started to build. I talked to other people on the bus who were planning to do one, I asked the driver where he thought was best to jump (he said Franz Josef, actually, although their jump-rate is much lower because of the changeable weather), I got increasingly hyped up about the big event. The day before we were scheduled to pull into Taupo, the clipboard came round the bus with the words I’d been both anticipating and dreading. Skydive. Butterflies started flapping their wings inside my stomach. Was I really going to do this? The idea was now starting to make me feel a little sick. Maybe that was just the windy Kiwi roads…

By this point I’d been travelling for over 3 months and I’d told a lot of people along the way about my plans to skydive. I’d talked myself into it. There was no backing out now. In a rush of decisiveness, I put my name down on the list for a 15,000ft jump. I quickly passed the clipboard forward before I had a chance to rethink my decision. The rest of the day was spent becoming increasingly anxious, trying my best to psyche myself up, and to ignore the swarm of bees that was now circling in my stomach. A couple of beers helped to calm me down a little, and I forced myself to get as early a night as possible ready for the big day tomorrow.

I awoke at 5am. I had been cursing the required early start the day before, but frankly I doubt I would have slept much longer anyway. Today was the day and I have never been more nervous about anything. The morning went by in a blur. I showered, ate breakfast and packed up my stuff. Before I knew what was happening, we were all on the bus again and I sat calculating that I was probably at least an hour away from a skydive. I tried to listen to music and relax and not think about it. But seriously. What the hell was I doing? It suddenly seemed completely mad. Throwing yourself out of a plane? Whose ridiculous idea was that?

We pulled up in a car park just outside Taupo and I had time for one very nervous cigarette before the limo arrived. Along with 7 other people from my bus, I sat in the limo and filled in the waiver, signing my life away, and tried not to find that absolutely terrifying. The atmosphere in the limo is not like anything I’ve experienced before. The tension, the nerves, the excitement, the “what the hell am I doing?!”, was palpable. The whole time I think the only thing that was keeping me on the path towards SkyDive was indecision to change my mind. That and the feeling that I’d regret it. I was here now, might as well go for it!

After a safety briefing, a weigh-in and lots of forms and decisions to make (what music for the video, how high to jump from, what type of video I wanted), it was finally time, and we headed through to another room to get suited up. This was the first time I was introduced to the man who was going to throw me out of a plane – Reece. He helped me get into the dark blue overalls and the harness for the jump. He strapped me in tightly enough that I somehow felt very secure. Then we had to do the slightly cringe-worthy interviews for my video, and before I knew it, we were walking up to the tiny pink aircraft and clambering in. 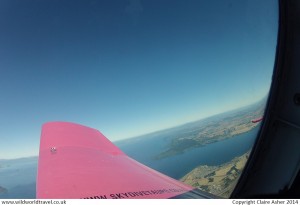 At this point my brain was screaming inside – “WHAT ARE YOU DOING?” – “ARE YOU REALLY GOING TO DO THIS?” – “SERIOUSLY?” – I tried to smile and enjoy looking out the window and not think about it too much. Just before we reached 12,000ft, those of us who were going all the way to 15,000ft were given oxygen masks, which only increased the atmosphere of nervous excitement in the plane. Then at 12,000ft the strangest thing happened. They opened up the door on the side of the plane and air rushed in. Then one guy, a cameraman, who had been sitting at the far end of the plane, climbed out of the window and just hung on to the side of the plane. Watching that was a very surreal sensation, my brain struggling to make sense of the input it was receiving. It hadn’t seen anything yet! Next, two of my friends, attached to their skydive partners, edged their way over to the door, and suddenly they were gone. They just vanished out of the side of the plane. My brain did a double take. It was so easy, so quick, so quiet. One minute they were there, the next they were gone. My heart was racing now, but we still had another 3,000ft to go!

The plane continued to climb and I continued to freak out on this inside. At this point, though, I knew I’d be paying the company nearly #£300 whether I jumped or not, and there was no way I was paying £300 for a 20-minute scenic flight. This was going to happen.

Finally it was time. We reached 15,000ft, and the two people sat in front of me were instructed by their partner to edge towards the plane door. In the blink of an eye they were gone. My stomach churned. I was up next. Suddenly an eery calmness washed over me. Reece tapped me on the shoulder and signalled for me to take off my oxygen mask and start to edge forward. Without thinking or panicking, I did what he asked. I positioned myself on the edge of the plane as he had told me, and leaned my head back onto his shoulder. I didn’t look down. 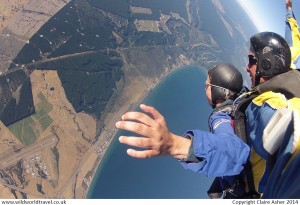 Suddenly there was a bizarre tumbling feeling and the most insane rush of air I have ever experienced. We were falling. My brain had a small panic attack and I screamed pretty much every expletive under the sun. Interestingly, as my brain slowly came to terms with what was happening, I realised I wasn’t scared of the height. Maybe that was just because I was already falling. Maybe it was just too high for my brain to comprehend. Eyes watering, face contorted by the rushing air, I tried to appreciate the view for a minute. If I looked up, I could see the curve of the Earth. Looking down I could see the amazing beauty of Lake Taupo, the town, and the hills around it. The weather was absolutely perfect, not a cloud in the sky, and looking left to right I could see coast to coast. AMAZING.

The 60 seconds of freefall was… intense. It’s impossible really to put into words. You just have to experience it. Whatever you imagine it will be, double, maybe even triple that. It is also the shortest 60 seconds you will ever experience. It was over so quickly, I barely even had time to process it. And then, without warning, I was jolted back into an upright position as the parachute kicked in. It wasn’t intense anymore, but it was unbelievably beautiful. Now, as we glided gently down, I had time to really take in the view, and it was just stunning. We twirled and twisted in the air, gently lower and lower and eventually, we came in to land. Sticking my legs out as he asked, I managed to land into a standing position and didn’t fall over, even though my legs were weak and wobbly from the insane experience I’d just had.

I floated around for a while after that in very simply the best mood I’ve ever been in. Adrenaline is a wonderful drug. We hung around as they edited our videos, and tortured us by forcing us to watch them in front of everybody else who’d jumped (my skydiving face isn’t my most attractive), and then the Stray bus pulled up to pick us up. I thought he’d take me into town now, as I’d booked 2 nights here and was hoping off the bus and leaving my new friends behind. Just before he was about to drive off, the bus driver came back and asked if I was staying in Taupo. I said yes. He told me I’d have to get off the bus and get the limo to take me to my hostel. He wasn’t going back into Taupo again. So I said some quick goodbyes and grabbed my bags and went back inside. The guys at Skydive Taupo were lovely and arranged for me to get a limo to my hostel in town with another couple who had just jumped – so I even got a couple of new friends rolled into the bargain.

Skydiving may be the most expensive extreme sport you can do. Prices do vary from location to location, but across New Zealand you were looking at around NZ$500 – NZ$800 for the whole package – the jump, the video, the t-shirt. And as you’re most likely only ever going to do it once, I personally think the keepsakes are worth it. Who doesn’t want a video showing their face looking as though it’s been shoved into a Dyson airblade hand dryer?! I can also say that while it might be the most expensive thing you can do in New Zealand, it’s also the most amazing and the most worthwhile. Adrenaline + newly conquered fear is a great feeling, and if you’re going to fall out of a plane, you might as well pick a beautiful landscape to fall at!

Have you done a skydive in New Zealand or somewhere else? I’d love to hear about your experience. Leave me a comment below :) 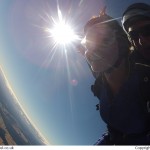